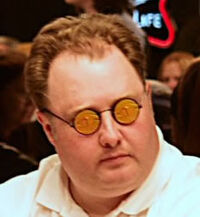 Gregory Raymer (born on June 25, 1964) [1] is a professional poker player. He is best known for winning the 2004 World Series of Poker main event, and for the opaque holographic sunglasses that he sometimes wears during hands.[2]

Raymer was born in Minot, North Dakota. His family moved numerous times during Raymer's childhood, from Minot to Clearwater, Florida and ultimately to St. Louis, Missouri. After Raymer graduated from Parkway High School in St. Louis, he enrolled at the University of Missouri–Rolla, where he majored in chemistry and became a member of the Kappa Sigma fraternity. He graduated from the University of Minnesota Law School in 1992 and practiced as a patent attorney for more than a decade. However, he no longer works as a lawyer.

After moving to Stonington, Connecticut in 1999, Raymer began playing poker at Foxwoods Resort Casino while he was working as a patent lawyer for pharmaceutical manufacturer Pfizer.[3]

Raymer first finished in the money of a World Series of Poker (WSOP) event during 2001 in the $1,500 Omaha hi-lo split 8 or better event won by Chris "Jesus" Ferguson. The next year he could be seen in the background as Robert Varkonyi celebrated after winning the main event at the 2002 World Series of Poker.

At the 2004 World Series, Raymer defeated David Williams to win the $5,000,000 first prize in the $10,000 no limit Texas hold 'em WSOP main event. (In the final hand, Raymer's Template:Cards defeated Williams' Template:Cards.) Raymer received the entry fee to the tournament by winning a $160 satellite event on PokerStars, just like the 2003 winner, Chris Moneymaker. Raymer is now a representative of PokerStars, alongside Moneymaker and the 2005 World Series of Poker champion Joe Hachem.

Raymer went on to finish in 25th place (out of 5,619 entrants) in the 2005 WSOP Main Event, earning him $304,680. This has been described by his peers as one of the most incredible achievements in poker, considering the rapidly increasing field of players in the Main Event every year. On the second-to-last day of play, Raymer held Template:Cards when he trapped Aaron Kanter into calling his all-in bet with Template:Cards. Even though Raymer was a 4:1 favorite before the flop, Kanter came from behind to hit running hearts to make a flush and win, thus crippling Raymer and effectively ending his tournament.

In 2005 Raymer also entered the inaugural British Poker Open which was filmed in London and was the UK's biggest live poker event in history. As a firm favourite Raymer made the final table to come third in a live final and collect around £20,000.

Raymer appeared in Poker Superstars III but was eliminated in the preliminaries.

Raymer is nicknamed "Fossilman" because of his hobby of collecting fossils. He uses a small fossil as a card protector while he plays poker. Early in his poker career he would supplement his bankroll by selling fossils to other players at his table.[2]

Aside from the World Series, Raymer plays few tournaments, choosing to spend time with his wife Cheryl and daughter Sophie instead of immersing himself in the poker circuit and the constant travel it requires. In November 2005, Raymer and his family relocated to Raleigh, North Carolina.

Raymer stated that he was allergic to alcohol during his appearance on the European Poker Tour.

In a December, 2006 interview Raymer said that he was considering running for Vice-President of the United States in 2008 as a candidate of the Libertarian Party.

One night upon returning to his hotel room after playing in a cash game, two men attempted to rob Raymer at gunpoint. Raymer held them off until police arrived and was unharmed.[6]

Retrieved from "https://poker.fandom.com/wiki/Greg_Raymer?oldid=17546"
Community content is available under CC-BY-SA unless otherwise noted.