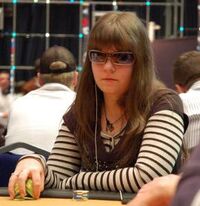 Annette Obrestad is a Norwegian professional poker player born on September 18,1988. She got her start in poker playing as “Annette_15” across multiple sites including Betfair, PokerStars and FullTilt Poker. She claims to have never deposited any money on a site and started her bankroll by playing freerolls and then running well in sit n’ go’s and tournaments. Around this time she said that she also played and won a $4180 person SNG while never (except for once) looking at her cards just to prove to her friends how important position and betting patterns were when playing poker. She has won over $2.7 million playing online.

She is not just an accomplished online player though as she broke onto the live scene in 2007 by winning the WSOP-E Main Event in London for £1,000,000 the day before turning 19 years old. She followed that up with a second place finish at the EPT Dublin after having the chip lead for much of the final table. She has numerous wins in smaller events during poker festivals and invite only tournaments that help bring her total live winnings to over $3.9 million.  She currently ranks 2nd in all-time money winners from Norway.

Annette Obrestad has also had a few sponsorships through the years with Betfair, Full Tilt Poker and Lock Poker. Controversy followed her throughout all those stops as Betfair ran afoul with the British Gaming Commission for encouraging underage gambling with her screen name, Full Tilt Poker became insolvent and Lock Poker has still not paid players for over 2 years to the tune of $15,000,000 plus millions of reported and unknown amounts of unreported money.

This article is a stub. You can help Poker Wiki by expanding it.

Retrieved from "https://poker.fandom.com/wiki/Annette_Obrestad?oldid=19232"
Community content is available under CC-BY-SA unless otherwise noted.